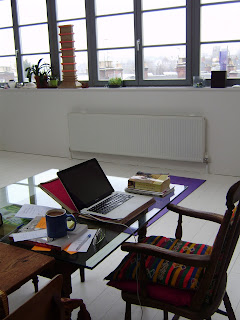 It's bloody cold! But not as cold as Wednesday when a real howler blew in all the way from Siberia. And there's snow too - not a lot, but enough to make the sidewalks a bit risky. Salting of sidewalks is not something I've witnessed here, but the roads get "gritted" by the "gritter" often. Those gritters don't give an inch - they dump grit on your car if you're stopped behind them, or so I'm told by one of my program mates, who knows about it first hand. Anyway, I stayed in all day and amused myself, surprised at how fast the time whipped by, like the wind from Siberia.

Yesterday I felt I really did need to venture out, lest I become a total recluse, so headed to the bus stop. One of the things I love about Norwich are the characters who get on and off the bus at various stops. After I took a seat, an old gentleman, probably in his late 80s, slowly and gingerly stepped onto the bus with his white cane tapping all around the door to make sure he was actually where he wanted to be. He was chuckling away cheerfully, thanking the bus driver for waiting. He took a seat across the isle from me and started chortling and carrying on, suggesting we all have a sing song (normally I'd jump right on that). I'm not sure if he even knew there were other people on the bus, and doubted he would have behaved any differently whether there were or not. Then he shouted, "Don't spare the horses!" and went all quiet, just muttering and singing happily under his breath until he got off in the city centre.

I arrived at the uni just in time to have lunch in one of the two eateries on campus. They do a great job of home-cooked meals, and for the grand total of £4, I had a roast beef dinner with roast potatoes and gravy, a mixed carrot-cauliflower-green-bean veggie thing, and a cup of tea. It's almost worth taking the bus in just for that. It's hard not to have any of the tempting desserts on display - always served with the familiar custard my mom used to make. But it's not worth the risk. I gave in and had a buttery cookie one day, and paid for it dearly. Why would I purposely inflict on myself a dairy-induced cold when all around me people are coughing and hacking from winter bugs? 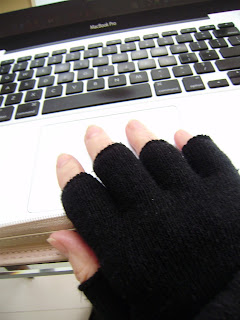 While at the uni, I also put in a change of module for Semester 2, which I can't believe is coming up so soon. I had originally picked a course called "Post Modern Theatre" thinking it would be an interesting departure from the biography/autobiography genres. But almost everyone in my program has registered for the "Publishing" module thinking it'll be easier in terms of required reading. The one-week immersion course I took at SFU last summer covered all aspects of publishing, and I figured it would be boring going over the same material. This is the UK though, and there are differences in the publishing business between here and North America. Besides, one can never have too much information about publishing. I won't know for a day or two whether I can make the switch, but I'll keep my cold fingers crossed. 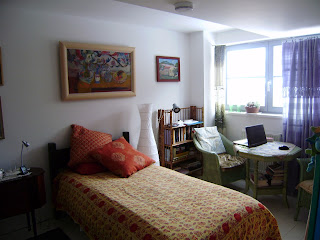 I'm adding three photos to this entry. One is a shot of my bedroom where I do quite a bit of reading and writing, and the other is a shot of the large open living space, where I eat, listen to music, and also do quite a bit of reading and writing. Working in the bedroom sometimes seems a bit confining, but it's cozier and warmer in there. I'm also attaching a shot of my Dickensian mittens which I picked up at the Saturday market for £1. A real must for these chilly winters day - and this is only the beginning of at least three months of winter. But there's the cheery prospect of Morocco on the horizon - less than three weeks away. Nancy has arranged for me to be picked up at the airport by a friend and his wife who own a riad in Marrakesh. They're going to take me through the darkest and most mysterious part of the souk (market) where I'll take photos for their website. I'll then write something that will hopefully attract tourists to their guest house - the promise of being shown a part of Marrakesh not seen by most Westerners. I just looked at the calendar - a propitious full moon will be shining over Marrakesh the evening I arrive.
Posted by Mo Phillips at 04:18