The Back Side of Norwich 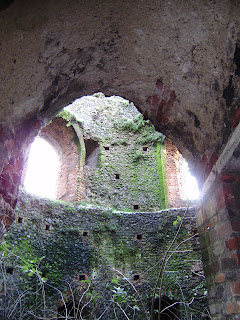 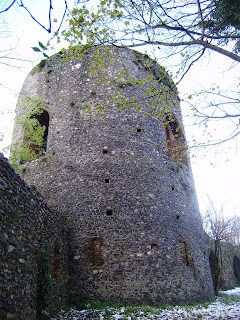 On Saturday I decided to head off in a totally new direction, having not yet explored the area to the east of the railway station near where I live. It had snowed lightly, and the paths were a bit treacherous, but I made my way up a slope towards what looked like a ridge. I figured I'd be able to see the city centre from up there, and take some good shots of the sun shining on the cathedral spire in the far distance. I saw a path off to right with a sign saying "foot bridge" so followed it a way before coming to an amazing structure, which I assume is part of an ancient rampart that once surrounded the whole city. There were no signs, no plaques to describe what I was looking at. The photo above is the inside of the tower. I considered pushing open the old rusting gate and taking the flight of stone steps up to the top, but changed my mind. There was something strangely spooky about the place. It made me remember someone saying that Norfolk folks were all quite odd, given their population had been reduced by half during the bubonic plague of the mid 1300s. They are, in other words, quite inbred. For some reason, this all came back to me as I stared up inside that tower, so I did the smart thing and headed on down the hill. 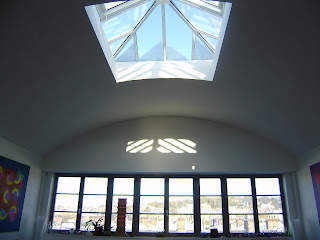 I got safely back to the flat and had tea and biscuits, so indoctrinated have I become to the English way of life. It's funny though to go to the grad pub with some of the younger students and watch them order tea and crisps (potato chips). I asked them how they could enjoy something sweet with something savoury, and they said they don't put sugar in their tea. It's just not done - it's called "trucker's tea" if you do. (I guess I'm a trucker.) Here's a shot of the flat just after I got back from my hike. There was a dusting of snow, which you can barely see on the roofs of the houses across the street. I love the way the light pours in from the skylight and reflects on the walls.
Posted by Mo Phillips at 12:42