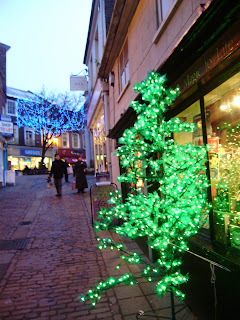 Yesterday I made myself leave the flat because I felt something akin to lethargy creeping into my bones. I walked into the centre of town and got quite caught up in the merriment of late afternoon shoppers, feeling thankful though that I didn't have to run around like a nut buying Christmas presents and getting stressed out over what to buy whom. I think I may be able to sidestep Christmas altogether this year. They don't celebrate it in Morocco, that's for sure. Although fellow Canadian Nancy said we could put a string of lights on the palm tree in the garden if we really felt we needed to. The camels will be enough of a reminder for me. And the bright star in the East.

As I walked through the narrow cobbled streets, I saw some very Christmassy sights though, and luckily had my camera to capture the true spirit of the shops. It really is the closest one can come to a Dicken's Christmas - the shops aren't pretending to be ancient...they are! 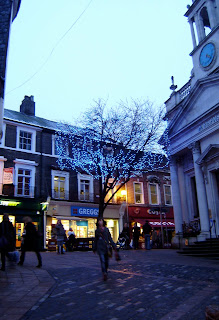 Today was relatively warm (3 degrees C) and windless, so I thought I'd head in the opposite director to last Sunday's walk. This one took me about two miles to the east. I climbed steadily upwards until I got to a ridge that opened onto an ancient forest called Lion Wood, which is a local nature reserve (according to the sign on the path). It's actually mentioned in the Doomsday Book of 1087, and is part of what used to be Thorpe Wood - a much larger track of land, now long gone, as are the wolves and wild boars that roamed freely. It was a beautiful walk, even in early winter, and for some reason reminded me of a walk I've taken many times on Keats Island - the walk from the main road through the woods to Plumper Cove. Maybe it felt familiar because I've also made that walk in the winter, many times. 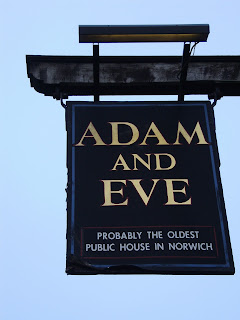 Coming back down towards town, I crossed the foot bridge over the River Wensum and lo and behold what did I come to - The Adam and Eve Pub! The one I saw a few weeks back and decided to forgo because I was on my bike. This time I went in. I love the sign...notice "probably" the oldest pub in England. I opted for the vegetarian dinner which was delicious and came with a crispy lump of sagey stuffing, a thick slice of veggie burger-ish something or other, mushy peas and broccoli, and roasted potatoes, all covered in homemade gravy, which I'm sure came straight off the beef dripping (so much for the vegetarianism). I enjoyed it with a small glass of merlot (as opposed to a large glass - a choice you're always given). It was still light when I left the pub and I felt well fed and blissfully tired from the long walk and fresh air. Tomorrow's a school day, so now I have to buckle down and do some reading. 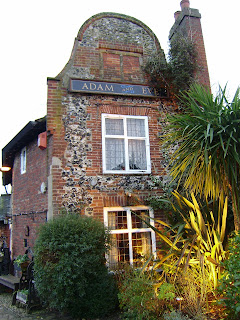 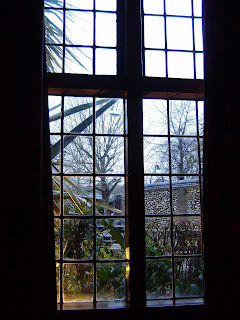