It was windy night in Norwich last night, waking me up a couple of times as it howled and rattled the metal roof across the way. It’s the windiest it’s been since I got here, and I really love it. Makes me want to be out on the moors in Bronte country listening to it whistling in the gorse. No mention of storm damage when I checked the Eastern Daily Press this morning though. I also woke to the sound of an owl hooting softly but distinctly outside my bedroom window. Always a good sign.
Yesterday was a day of social stimulation. Nancy had invited her friends Mike and Susie for lunch – but they insisted on bringing the meal – spicy vegetable soup made by Mike and a delicious loaf of granary bread. They also picked up from Marks and Spencers a strawberry trifle with custard and whipped cream - one of my all time favourites. I desperately wanted to taste it, but knew I’d end up congested and feeling miserable. Mike and Susie have a smokehouse up on the North Norfolk coast and have just bought a catamaran to take their grandchildren out on sails around the broads. They invited me to come with them when the weather gets warmer, and of course they didn’t have to ask twice. I can’t wait. That’ll be one of the destinations I’ll make on the train with my bike.
After they left, we got ready to have my friend and classmate Thea and her husband David over for dinner. Nancy had invited her friends Vanessa and Andy to join us but they had already bought tickets to  a flamenco guitar concert at the Norwich Arts Centre. They came for a drink though and were able to stay and meet Thea and David. Even though none of them knew each other, they seem to have lots of friends in common. Andy was involved with the development of the publishing program at UEA in the 80s, one of my modules for this semester. They’re all extremely nice and very interesting people. David is a lute maker and he and Nancy had a long and esoteric conversation about the similarities between the lute and the Moroccan gimbri. Tomorrow night we’re invited to Thea and David’s for dinner to meet a couple of artists and who lived in St. Ives during the sixties. Nancy doesn’t recognize their names, but they'll likely know lots of people who lived in St. Ives around that time when she and Anthony were there.
A seemingly lazy day, although I’ve got to get through Robert Graves’ Goodbye To All That and Vera Brittain’s Testament of Youth by Monday. Funny how curling up with books for a whole day can make one feel guilty – I have to remind myself that I’m actually working.
On the first weekend in March, I’m going to Wales to visit my long-time friend, Frankie. She has lived in Llandrindod Wells for about 18 years and I’m looking forward to taking the train from Norwich to Shrewsbury, then getting on the “Heart of Wales” train line to Llandrindod. Frankie says it takes longer than going straight to Hereford and then being picked up by either her or Tony, but it’s the first week of reading break, so I’ll have lots of time to read on the train and not worry about getting back to Norwich for classes. The student discount I get on rail travel makes me want to do more, and I'll regret it if I don't. Given I’m not far from Scotland, I’d love to go to either Glasgow or Edinburgh and listen to some good pipe music. 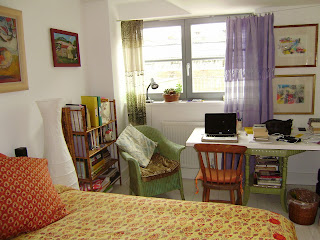 Yesterday, Nancy said I should have a better work space in my room, so we got a table top she had stored away and we laid it across the little table I’ve been working on since September. What a difference it’s made. I got so excited I took a photo, and it’s the only one I’ve taken for a couple of weeks now, so had to include it here. It’s now almost midnight and the wind has picked up again. If I can stay awake, I'm going to read a few more chapters of the Robert Graves autobiography.
Posted by Mo Phillips at 16:23