I was so excited about the prospect of going to London yesterday that I actually woke up at 7:30 am, which was way too early because I didn't have to be at the train until 2:00 pm. I never wake up that early, especially when I've read until 1:00 am, but I couldn't talk myself into going back to sleep.

I met Thea at Norwich Station as planned. The day was warm and sunny, which was an amazing stroke of luck given it rained all night. Thea and I conscientiously brought along our books and settled in for the journey. But I couldn't read with all the wonderful scenery flicking past the window. I managed to get a few good shots in - very different to the snowy scenes of winter on my way to Gatwick last December. Like Ratty in The Wind in the Willows, I could feel myself getting over excited about the warmer weather coming on, and I'm yearning to get out in nature and do some cycling and sightseeing. 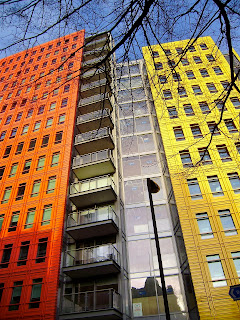 The journey is two hours long, but before I knew it we were at Liverpool Station and Thea was leading the way through the turnstiles like the seasoned Londoner she is, or at least seems to be. She said she doesn't come to the city very often, but she clearly knows her way around. Because it was such a lovely day, she suggested we take a bus instead of the tube, which would give me a bit of an opportunity to see some sights. The bus took us past St. Paul's Cathedral and along the familiar-sounding Drury Lane, which was a slum in the 18th century and crowded with gin palaces but is now a very respectable area where the Theatre Royal is located. Even though I've been coming to England for years, I've never actually spent much time in the London itself and must resolve to get to know it better. I told Thea I felt like a kid in a candy store, and almost as soon as the words were out of my mouth, I spotted a new apartment complex that reminded me of brightly coloured candies, and of course I had to get out the camera. 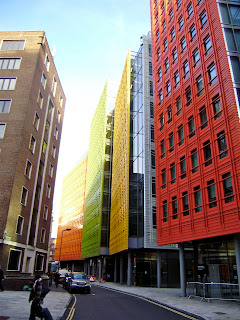 It didn't take us long to find the Taz Restaurant (located just down the block from the British Museum) where we were meeting our fellow classmates for a quick supper before we took in the talk on publishing biography at the Biographer's Club. There were eight of us altogether, which made for even seating and the chance for everyone to hear each other. The atmosphere at the Taz was soothing and the Greek food was fresh and tasty. I ordered the calamari, as it's been ages since I've enjoyed it, the last time being in Vancouver at La Bodega where it's always excellent. 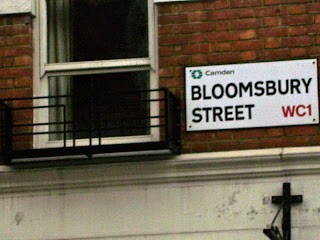 After dinner, we walked the few blocks to Swedenborg House - a lovely stately old building and home to the Biographer's Club. The place was hopping when we got there at 6:45 pm. A bar was set up inside the door where wine and soft drinks were cheerfully served by members of the club. Our friend Nicoletta organized the whole evening for us - from booking the restaurant to reserving our places at the event. Good thing too because it was completely sold out. There was a panel of four publishers who basically told us how difficult it is to get published, saying so almost gleefully I thought, but maybe I'm being a bit hard on them. I don't think any of us went away feeling that we had heard anything we didn't already know, but what a wonderful opportunity and excuse for an evening out with my classmates. We said our goodbyes and everyone headed off in different directions for home, Thea and I making our way back to Liverpool Street Station and the train to Norwich. I collapsed into bed at midnight, feeling tired but happy, and just sorry that the day had gone by so fast.