There hasn’t been an opportunity to post an update on my blog since Nancy and I went off to Edinburgh, so here’s the gist of our travels. 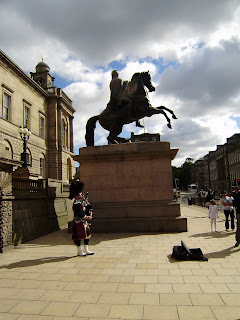 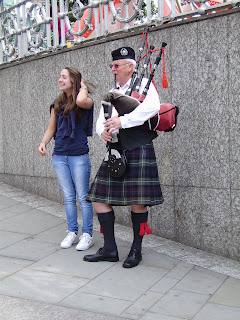 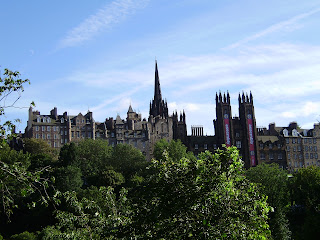 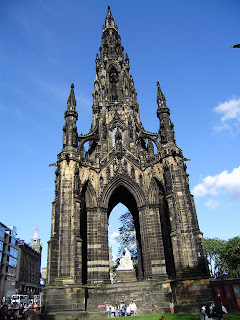 We boarded the train at Norwich at 10:00 am on August 4th, and six hours and many miles of vast rolling landscape later, we climbed off in Edinburgh. The late afternoon was warm with intermittent sun and cloud and we walked the ten minutes from the station to our B&B – the Craighmoss on Pilrig Street, owned by Isabelle and Harry, two very friendly and welcoming Scots. After depositing our bags in the room, we walked back into town and the buzzing energy of the Edinburgh Festival – pipers staking out their turf on almost every corner and blasting oh so familiar tunes – Scotland the Brave, Dark Isle, Flowers of the Forest, Amazing Grace. After wandering around for a couple of hours, we found a quiet and inviting bistro at “The Scotsman” – the 19th century building that was home to the newspaper of the same name. We ordered a gin and tonic to start (served by attentive Russian émigrés), eventually moving into the food – smoked mackerel for Nancy, hot and crisp fish and chips for me, paired up with a glass of perfectly chilled sauvignon blanc. We got back to the B&B around 10:30 pm and I fell into my bed, sleeping soundly until waking up and checking my watch, realizing we had to quickly get downstairs for the 8:30 am last call to breakfast. I went for the full monty – bacon, eggs, sausage and grilled tomato with toast. It’s a good thing we’ve been walking our feet off. 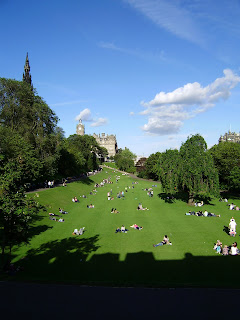 Before we left Norwich, Nancy had touched base with an old friend named Jan, who was passing through Edinburgh and we arranged to meet her at the art gallery. She was waiting for us at the entrance at the appointed hour of 1:00 pm and after greetings and hugs, we made our way into the inviting minimalist café inside the gallery and ordered a bottle of pinot grigio to start. The food was excellent too. Nancy and Jan both chose the grilled veggie sandwich and wild mushroom soup, while I opted for the humous with onion jam and oat cakes. The two women had lots to catch up on, both being desert adventurers with a fascination for Morocco, its music and dance – and the mysterious Berbers. 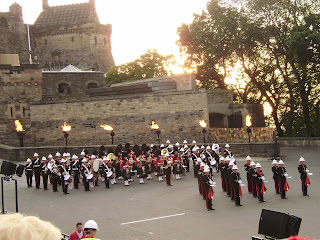 After lunch and a quick look around the gallery, we hailed a cab and went back to the train station where we said goodbye to Jan as she made her way to her train to York and we went off to explore the city. I’d never been to Edinburgh before and was impressed with its imposing ancient architecture, the green sweeping bluffs that guard the city to the north and the sparkling views of the North Sea in the distance to the east. I’m not sure how many visitors pour into the city during the Festival, but the streets were moving throngs of humanity, representing almost every nationality on the planet. And everyone seemed to be smiling and enjoying themselves. I was excited because in just a few hours we would be taking in the Royal Military Tattoo. It was not a disappointment. The mass bands that marched in from the shadows of the castle drawbridge, piping and drumming, sent shivers up my spine. Soon the sun set behind the castle and lights came up to illuminate the façade, changing colours and casting images on the stone. At the end of the evening, high up on the castle ramparts, the lone piper began playing a haunting tune called “The Parting Glass,” and I cried.
We braved the crowds that poured out into the dark street at the end of the performance, made our way back to the B&B and fell into our welcoming beds. 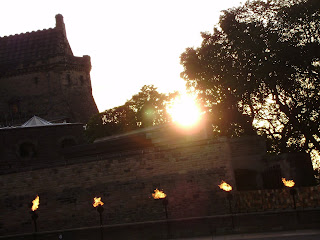 Next morning, after another fortifying breakfast, we checked out of the B&B and headed off to find the house of Nancy’s friend, Vashti Bunyan. Vashti had invited us to dinner and an overnight stay with her and her partner Al at their impressive Victorian home just blocks from the B&B. We wheeled our suitcases along the sidewalk until we came to the right house and pushed the buzzer. Vashti and Al had just returned from a holiday in Greece and looked tanned and fit. While I’d never met her before, I’d heard lots about her from Nancy. Vashti was an old friend of Nancy from the 60s and she became well known for her song “Just Another Diamond Day” which she produced with the Rolling Stones. She and her partner Robert, also a good friend of Nancy (the one who launched his sailboat in Broadstairs in an earlier blog), took their horse and Gipsy caravan from London and headed to the Isle of Skye back in the late sixties, basically leaving civilization behind. Now in her sixties, Vashti is still beautiful and has resurrected her singing career. She and Al were incredibly warm and welcoming and they held a dinner party that night with three other women friends (one of whom also stayed the night but who left before anyone else was up), which went on until well past midnight. Next morning, Nancy and I sat with Vashti and Al around their large dining room table drinking coffee and eating fruit and granola while Nancy and Vashti reminisced about the sixties, recalling one story about Vashti walking down Liverpool Road in Islington in her bare feet, leading her horse. She’s a remarkable woman who ended up raising three children in the wilds of Northern Scotland, all of whom went on to become successful too. It was hard to pull ourselves away from this cozy room and the fascinating stories, but we had to catch our train back to Norwich, so reluctantly bid our hosts goodbye. If Vashti comes to perform in Vancouver, as she did during the Winter Olympics, I’ll certainly be in the audience.
So Edinburgh was a huge success and delight (despite Nancy’s luggage going missing, but which met us back in Norwich). I was thrilled to have experienced the Tattoo and really pleased that Nancy had agreed to come with me. I wouldn’t have met Jan and Vashti and Al otherwise, who all added something very special to the trip - a reward to myself for submitting my dissertation and completing all the requirements for my Master’s. After two days in Norwich running errands and arranging to have three boxes of my belongings shipped back to Vancouver, I got up at 5:00 am on Tuesday to meet a taxi in front of The Factory and Nancy and I tearfully said our goodbyes. We still have Skype though, and there’s that book to collaborate on…
My return to Vancouver wasn’t as fraught as my arrival in the UK almost a year ago, but there were certainly some frustrating moments. After flying from Norwich Airport to Amsterdam, I learned that the plane was overbooked and I was bumped to a flight leaving Amsterdam three hours later, flying via Seattle. I was compensated though, which went a long way towards soothing my ruffled feathers. Predictably, my bag failed to show up in Vancouver but we were reunited 24 hours later.
I’m back in once piece, happy to be home, and amazed that my time in Norwich is now behind me. I’ve had one hell of a year, spent time with old friends and met some new ones. At the end of September, I’ll get my results and will hopefully be able to put “MA” after my name and say “Mission Accomplished.”
Posted by Mo Phillips at 09:23