Another great experience renting a car from Enterprise. They arrived at the flat on time to deliver the car and Nancy and I started our journey to Nottingham to visit Chris – an old friend who “got scuppered” by a stroke a few years ago and is wheelchair bound. He now has a team of five women coming in and out, looking after him – probably one of the reasons he seems to be thriving.

We started our journey without the benefit of SatNav (satellite navigation for those, like me, who have to ask), but with a good road map. I followed the road signs and Nancy followed the map, and between us, we got to Chris’ place in four hours without getting lost. When we arrived at his somewhat dilapidated old house, we were greeted by him and his long-time partner Rosie, who immediately opened a good bottle of perseco and, raising our glasses, we toasted all our friends. One of Chris’ caregivers, Ruth, delivered a meal she had prepared at her own home. We started with smoked salmon with small round potato pancakes and crème fraise served with the bottle of Italian rose Nancy brought. This was followed by roast lamb and a green salad of butter lettuce and watercress, washed down with a very decent merlot-shiraz. We topped it all off with poached peaches in a delicious wine syrup served with Ruth’s "famous" pistachio nut Florentines, and Chris surprised us all by ceremoniously opening a bottle of 2003 Chateau Rieusse sauterne. I didn’t pay attention to the labels on the first three bottles of wine, but the sauterne was so absolutely heavenly with the poached peaches, I decided to make a note of it. At nearly 1:00 am, my eyes were closing, so I bid everyone goodnight and slipped upstairs and along the dark hallway to my assigned room.
The next morning Chris was in his bedroom, but wheeled out to say goodbye to us. Before we got completely out of Nottingham and on the road to Norwich, we felt we needed some breakfast (given it was almost noon) and stopped at a place with an almost full parking lot – always a good sign. It was slightly reminiscent of a Denny’s, but we were hungry and not fussy at that point. The restaurant, called appropriately “Eating Inn,” was warm and welcoming and you just knew comfort food was on offer. There were families celebrating birthdays or just enjoying Sunday brunch, and we were shown to a table in the corner, next to an old man who was stooped over his plate, just about ready to tuck into his roast beef and Yorkshire pudding. He greeted us with a lovely smile and a “bon appetite,” and after we ordered – Nancy chose the chicken and mushroom pie with chips and peas and I went for the scampi and chips with peas – he started a conversation with us. He talked about being in Germany at the 1936 Olympics as a young student, when Jessie Owens won the 100-meters race, and he recalled how Hitler saluted the crowd and left immediately, clearly unhappy about a Black man winning the race. After he finished his meal, he said how much he enjoyed talking with us, slowly moved into his coat, put on his hat, grabbed his cane, and said he was going to walk the mile to a friend’s place, a woman who wasn’t “doing too well.” He told us he used to walk much further, but he was 90 now and it was getting more difficult. We both felt lucky to have crossed this man’s path. We were also struck by the incredibly friendly people in the restaurant – smiling and saying, "Ta loov...yaw rawt?"
The drive back to Norwich was quite spectacular, with the sun shining on the vast, flat fens. I feel I really know my way around now, and coming in to Norwich from the North was familiar and reassuring. And there is nothing like the freedom of being behind the wheel of a car after you’ve been riding public transit for months.
Even though I’d planned to have my dissertation completely finished today, some more material has come to light and I’m now going to spend the weekend integrating it into what I already have and getting it ready for printing and binding on Monday. I’ll take a breath on Tuesday and Wednesday, then it’s off to Edinburgh on the train Wednesday. So excited!
I finally downloaded the photos from the Wield Olympics and the picnic near Hungerford, so here they are… 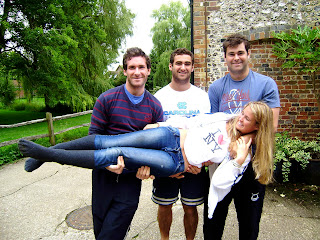 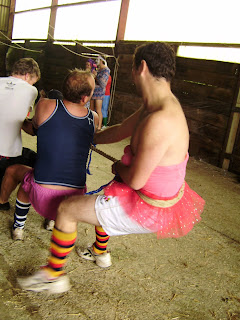