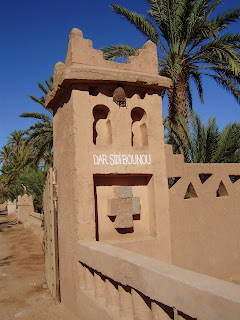 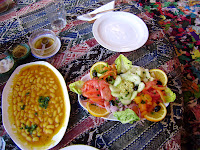 New Year’s Eve day was a busy time at Dar Sidi Bounou. People kept arriving at the gate – Germans, Norwegians, and Americans, even though the place was full. Daoud had forgotten to tell Nancy about two groups, so room had to be found for them in the Berber tents. It’s amazing how everything falls into place though. Nancy seems to be quite calm about the whole thing. The cook, Rakia, is a magician in the kitchen, and plate after plate, bowl after bowel of delicious, steaming hot meals are carried by Said and Havid to the hungry guests in the “restaurant” – an open air thatched space. We were first served Moroccan soup with bread baked by Rakia. She also prepares the traditional tangine, a meat and vegetable stew that arrives at the table piping hot in its lidded clay pot. Tonight there were delicious skewers of spiced chicken done over coals. Nancy came back from the kitchen laughing and said that the deaf gardener and the one-eyed man with the donkey cart who collects the rubbish were standing together over the fire, fanning the coals for the brochettes. The salads are prepared by Nacer, the man who does all the chopping of vegetables for the fresh salads and the potatoes, carrots, onions and peppers that go into the tagine.
I asked Nancy what happens when the rains hit (like the day before I got here), and she said everyone is thrown into action and brings as much as possible into the shelter of the house. Rain, while rare, is a real problem because everything is made of mud and straw – the whole house. There are signs of erosion where the water has run down the walls, but a bit of slick mud trowelled over the damage by someone who knows what they’re doing is all that’s required to fix it. 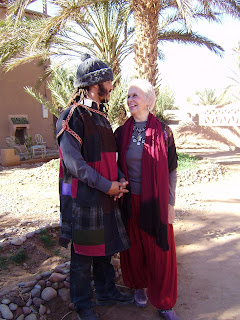 The plumbing and electricity are incredibly fragile. There is only one outlet in the kitchen that works for charging laptops. Yesterday Nancy and I noticed a lot of water on the kitchen floor, and apparently the drain in the sink had come undone. But guests don’t seem to complain, and if they’re the type who would, they shouldn’t come here. The sunshine and pristine air, the delicious Moroccan food and the music all blend to make this the quintessential oasis in the desert. I feel that Nancy and Daoud are going to become quite famous here in Bounou, if they’re not already.  Nancy entertains guests with her encyclopedic mind and broad knowledge of Moroccan music and history. I don’t know where she finds the energy, but she bids the last guest adieu at night and welcomes the first ones to breakfast in the morning. She calls herself La Raine du Sable, and it’s a fitting moniker. The boys who work here adore her – she’s fair but firm with them, running a tight ship, or at least trying to. They desperately need a manager though so Nancy can retire to her new house across the garden to write and paint. Although the salary would be minimal, this would be a great place for the right person who wanted to be in the desert, living a simple life, with a laissez-faire attitude and not bothered by the lack of infrastructure. The expression used freely and frequently is In’challa – God willing. 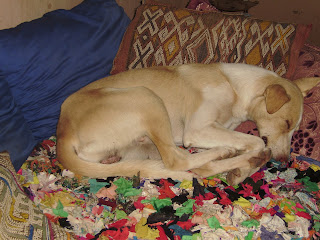 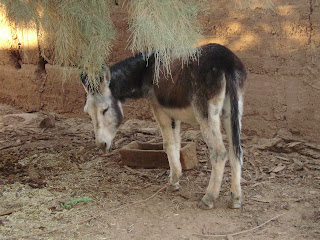 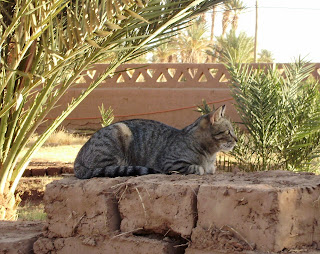 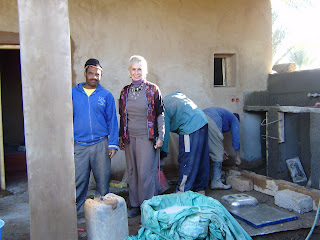 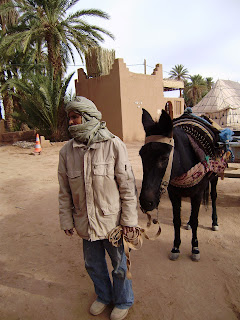 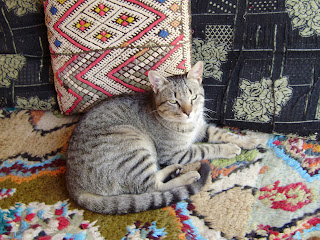 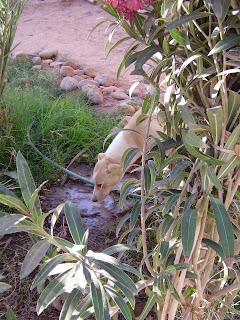 Last night Nancy and I were sitting on the terrace, and along comes Cambo, the desert dog, who is incredibly affection. He just wanted a bit of petting, then settled down on the sofa and fell dead asleep. He’s in excellent shape with a taut muscular body, probably from chasing rabbits around the dunes. I’ve never seen a rabbit and neither has Nancy, but she thinks that’s what they eat. They also can be seen outside Rakia’s kitchen door at night, enjoying the leftover tidbits she serves them. The cats, who don’t seem to have names, come also and lie near the terrace, all seeming very relaxed and content - an ambience that pervades the whole place. Insects are minimal - it’s only the flies that can be bothersome, and only at lunch time when the temperatures are warm. Sitting here now in my mud hut, all I can hear is birdsong and the shouts of men working on Nancy’s house/studio.
Posted by Mo Phillips at 10:51