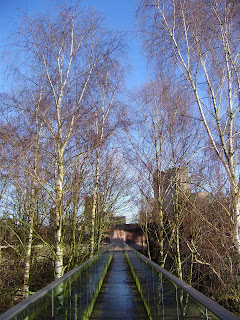 Back in class today and it felt like Spring! When I left Norwich for Morocco on December 21st there was snow on the ground.

I've been working hard all week finishing up the two big essays and will hand them in tomorrow. What a huge relief. Yesterday was the first class for the autobiography module and today was the beginning of the publishing course, so I'm back in the saddle for the final lap. It was a bright, sunshiny day and I realized how different it's going to be in another month or so when the days get longer and it'll still daylight when I take the bus home. I could almost feel it in the air. There are even pink and white primulas planted in boxes around the campus. My friend Juliet reminded me though that it's only January and we could still be in for some nasty weather. I just don't want to believe it.

Walking to the bus for the first time since before Christmas, I saw the driver talking on his mobile phone about half a block away while three or four women stood by the door of the bus, which was closed. They told me that there was a suspicious bag left on board and that the driver was calling to have the bomb squad check it out. I'd just been reading in the paper on the weekend about the bombing of the No. 30 bus in London in 2005, so stepped back gingerly while the women gaped at the menacing valise through the window. Luckily, another bus came along in minutes and we left the driver to deal with the experts. I didn't hear anything on the news, so assume all was well. 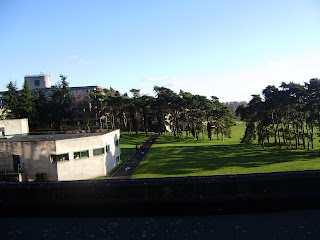 Nancy has come back from Morocco for a month's stay in the flat and I'm realizing the benefits of having someone around. She's made dinner for me two nights in a row and I feel like a kid coming home from school, savouring the smells from the kitchen. It's also great to be able to talk about what went on in the seminar - a way of regurgitating all that made its way into my poor overworked brain. Yesterday in class we covered St. Augustine and his Confessions - he was born in 354 and his Confessions are considered the first Western autobiography. I found it really hard going though (boring) - memories of Plutarch and Suetonius last Fall. Then it was on to Margery Kempe, flash forward a thousand years to 1373 for the first female autobiography, although she didn't actually write it herself, but dictated it. Poor Margery spent most of her life wailing about God and making a nuisance of herself. Some of us in class thought that she just told people God had told her to do this and that because she wanted to escape her life as a woman, a wife, and as a mother of fourteen children. Being insane, or at least pretending to be, cut a woman a lot of slack in those days. Next week, we're covering Thomas de Quincy and his addiction to opium (drugs being a replacement for religion), then Mary Wollstencroft's autobiography A Short Residence in Sweden, which will be fascinating. We're having to read two books a week for the rest of the semester, so I'll have to really pick up the speed.

I got some bad news this past week when I heard that a friend at home has been diagnosed with cancer. It's hard to be far away when you hear something like that, and there's nothing you can do except let them know you're holding them close to your heart and wishing them all the very best that can possibly come their way. I think that sometimes just hearing that and knowing it's true can help in some small way. 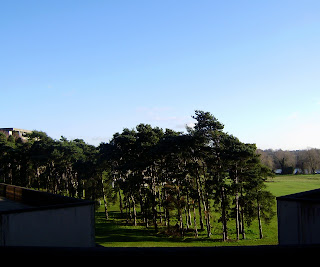 This is a short blog because I feel like I've been mainly just hunkered down with my head in the books since I got back from Morocco almost two weeks ago. That doesn't seem possible to me, but I've just checked the calendar and it's true. What I really wanted was an excuse to post a few pictures I took around campus today. A spectacular day. Makes me feel grateful to be alive and to be healthy and doing something that feels very worthwhile.
Posted by Mo Phillips at 17:25